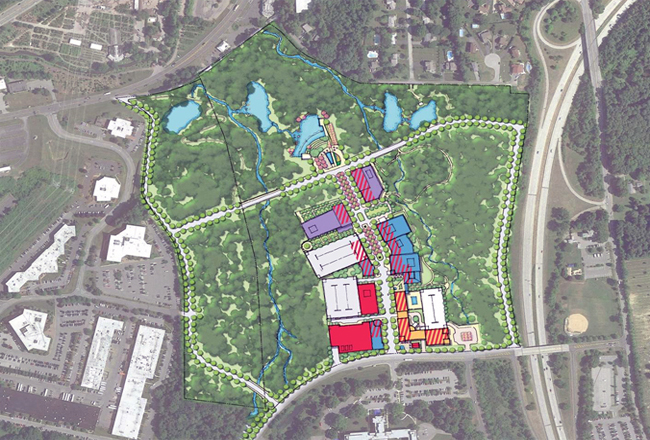 A rendering of the location of the North 60 project.

John Fareri’s 7-year dream of building a $1.2 billion life sciences complex in Valhalla moved closer to reality on Monday when the Westchester Board of Legislators approved a 99-year lease of county property.

The lease was approved unanimously, 17-0.

Given the size and scope of the project – Astorino said it will position Westchester as a global biotech center – county officials spent several years negotiating and vetting the deal.

“We needed to make sure everything was done right,” board Chairman Michael B. Kaplowitz said at the press conference. “When you have a 99-year-deal and there’s no way out, you don’t want to see a divorce on the horizon.”

Fareri Associates LP of Greenwich must now secure land-use approvals from the town of Mount Pleasant.

The 60-acre site is along the Sprain Brook Parkway on the Grasslands Reservation, a a 512-acre tract that the county bought in 1915.

Fareri Associates owns 20 acres next to the North 60 property and won the rights to develop the site.

The complex will be built in three phases over 25 years, including a West Research Village, Central Village and East Research Village. It will be designed around a Main Street theme, with shops and restaurants, plazas and gardens, bikeways and pedestrian paths, and a shuttle service to nearby Metro-North train stations.

But the villages will not include residences, in a concession to government officials and residents who do not want to strain the school district.

The county approval triggered the initial lease payments, beginning at $125,000 a year. As buildings are occupied, Fareri will give the county a portion of the project’s rental income.

Fareri has estimated that North 60 will create 4,000 construction jobs and 8,000 permanent jobs, pay $7 million in annual rents to the county and generate $9 million a year in local real estate taxes.

The next big step is an environmental review that could take two years or more to finish, with Mount Pleasant as the lead agency. By the time land use permits are issued, it could be three years before construction begins.

“We will not let you down.”